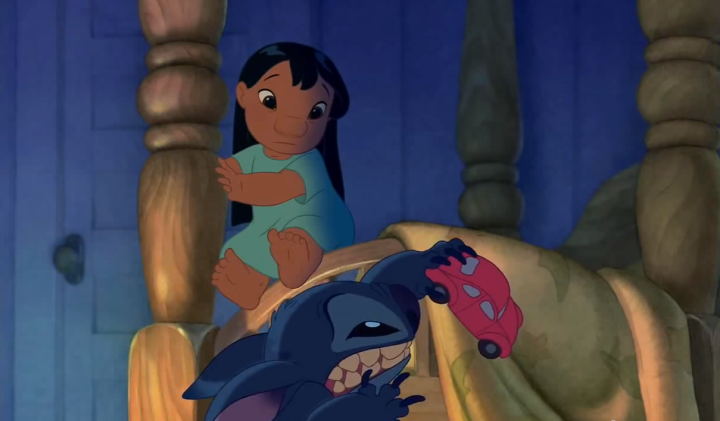 Directed by Chris Sanders and Dean DeBois, who both went on to write and direct How To Train Your Dragon, Lilo And Stitch for me, is 1 of those films that I chose to miss when it first came out, and for a number of years afterwards.  Why?  Because I was in high school and wanted to look grown up and interesting by avoiding cartoons outside of The Simpsons and pretending that I understood Fight Club, Goodfellas and Resevoir Dogs when I first saw them.  Fast forward 13 years later, I would now see those years as decent comedy material, and would probably choose to watch something like Lilo And Stitch over Goodfellas and Reservoir Dogs (but not Fight Club, that 1 is in its own league!) when I want to simply relax and smile.  Now that I’ve finally seen this, what can I say?

Lilo And Stitch is 2 stories happening at the same time that end up mixing together about 20-30 minutes in.  The first story follows Stitch, who is infamously known in the galaxy as Experiment 626 (voiced, believe it or not, by the film’s co-director and writer, Chris Sanders).  He’s an alien, who loosely resembles a blue Koala Bear with 6 arms, and has been created illegally by Dr Jumba (voiced by David Ogden Stiers) for destruction and mayhem.  After escaping from what is effectively a prison sentence, Stitch steals a space police vehicle, and uses it to travel to earth.  Seemingly landing in the ocean, but actually landing in Hawaii, where upon arriving, gets run over by 3 lorries that knock him unconscious, leading to his new destination…the dog pound.  Meanwhile we have our 2nd story, following a young girl named Lilo Pelekai (voiced by Daveigh Chase, in the same year she played the scary little girl down the well in The Ring).  Lilo is quite an awesome little girl.  She likes swimming in the ocean, beating up her friends (if they can be called that) when they annoy her, and listening to Elvis Presley records (something pretty rare, as Disney almost never include anything outside their own universe, especially at the time).  She’s an orphan who is being looked after by her older sister Nani (voiced by Wayne Campbell’s girlfriend in Wayne’s World, Tia Carrere), who struggles to find a job and look after her, all while being harassed by a mean looking social worker named Cobra Bubbles (Voiced by Marelius Wallace himself, Ving Rhames).  After being told that Nani might lose custody of Lilo, they decide to try and bring the family together by getting a pet dog.  The dog they adopt?  `Experiment 626, who is now hiding 2 of his arms, wings and antennae to look more earth-like…but the other dogs aren’t fooled by this.  After this comes a very cute, surprisingly violent, character-bonding story, which on the surface makes Stitch look like a dog with issues, but it’s actually Stitch losing his purpose in life…Imagine if he landed in New York in 2012?…The Hulk or Thor vs Stitch…Nomura-san, if possible…Kingdom Hearts 3?

This is 1 of those Disney animated movies that possibly appeals to adults more than kids (in its own way) because it’s not about Princesses or an enormous adventure to a far away land or beauty on the inside or taking your place as king, rather it chooses to be a film about family and belonging, and present both the highs and lows of some family relationships, whether they’ve known each other for years (like Nani and Lilo) or are new (Lilo and Stitch).  The story doesn’t stray far from their Hawaiian Island outside of some photographs in montage scenes, and the fact that Nani struggles as a mother-figure to Lilo (and also struggling between being a Mother and a sister) provides a genuine, mutual understanding that parents and guardians could experience.  The film provides plenty of scenes that would make everyone laugh, as both Lilo and Stitich are incredibly energetic and animated on screen (and includes 1 of the best Godzilla parodies I’ve seen in a while, and that includes Hot Fuzz and the Beavis & Butthead movie…with Stitch reminding me of a 2nd Cousin), but at other times, the characters mostly act less like role models and more like human beings, which is why I would say it’s a little more adult in this sense…also, the relationship between Lilo and her sister Nani is fantastic!  I couldn’t help but smile and laugh when they annoyed each other.

Now onto the technical/creative whatnot of the film:  In terms of its presentation, some could argue that Lilo and Stitch is a step back from other animated epics that Disney have done before.  How do I mean?  Well, watch Tarzan or The Hunchback Of Notre Dame sometime, the animation in those films have a surprising amount of depth for a 2D feature.  But Lilo and Stitch looks very flat in comparison, and resorts more to beautiful watercolour backgrounds with the animated characters on top without much blending between the 2.  I don’t have a problem with this, in fact it’s a nice change and slightly closer to being like anime in this case.  It remains beautiful to look at, plus it has some great art design and an amusing use of photographs (like Lilo having an actual photograph of Elvis Presley).  It’s also a very recognisable film, due to how different the character designs are compared to other Disney movies (primarily the shape of the eyes and nose of human characters, it makes them stand out from other Disney designs), and Stitch is a well made design.

The music features 6 songs by Elvis, and they’re not only used well, but they also led to some amusing one-liners and possible new fans of The King.  So yeah…Elvis songs in a Disney movie.  Some would give that 5 stars alone, but there is other music, which may bring that down a bit.  The other music’s great, but it’s not Elvis.

The story’s very good, but it’s not the best.  The characters are awesome, and in the process, it’s the characters who make the film.  But the actual story itself feels a bit more of an afterthought with the characters driving the story rather than the other way around (which, to be honest, can work wonderfully…It’s 1 reason I prefer this to James Cameron’s Avatar), the story is there, and it’s better than plenty of other Disney films, but as said, not the best (Which is probably a reason why they decided to make sequels and a TV series spin-off)

The voice acting is also really good, an excellently chosen cast with everybody matching the character they’ve been assigned to, including Stitch (That’s 1 talented director).

Would I recommend Lilo & Stitch?  Yes!  It’s an overlooked, underrated gem that oozes with charming yet human characters, lots of well presented relationships and character interactions, some really amusing scenes, and also pretty adorable and at times reminding me of the likes of A Christmas Story or The Little Rascals when it comes to how the kids behave.  It’s great.